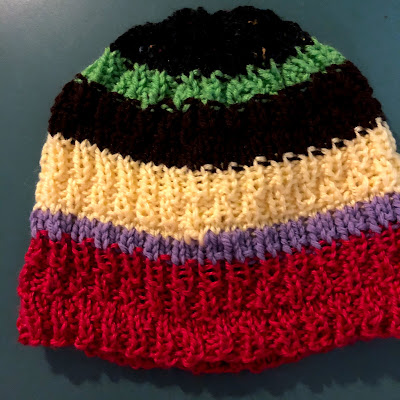 It is yet, another hat. I keep making hat when I should be working on my dress for  the cruise my husband and I are going in March. More on that later on in the future. This had is made of several scraps I had. I thought it turnout o.k. color wise. I like variety. The pattern stitch did not turn out as expected. I had adapted a pattern from 365 Knitting Stitches a Year Calendar I got from Christmas 2012. If you have been following this blog for a while, you might remember I did year long blanket project making squares using this calendar back in 2013. Here is the first blog post about this and here is the last post about it. 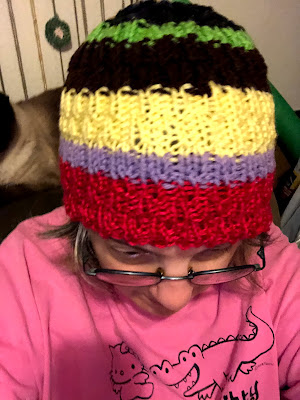 Enough about the blanket and back to the hat. For hat I wanted to use the brick rib stitch from January 3rd. However when I try to adapted it to work in the round, it did not turn out as expected. It worked out o.k., just not as it was originally intended.

When it come to start doing the increase, I ended up messing this also. I am not going to write out the pattern for this, what it ended up doing is I decreasing 9 stitches every other row until is was down to 9 (or maybe 12) and closed up the top.

So I am obviously going to make another hat hopefully getting the pattern stitch to where I want it to be.
Hat Knitting