First Hat Made This Year for Hat Not Hate Program 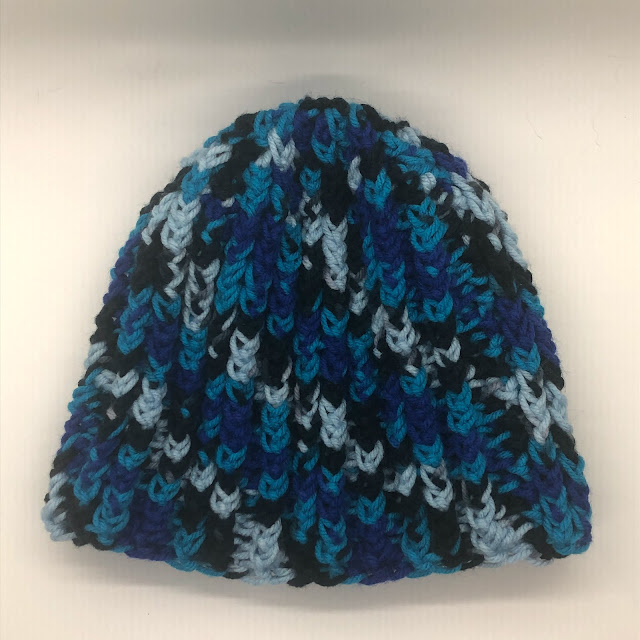 Last year I had learned about the  Hat Not Hate program, which is am now committed to this program. What this program does it spreads the anti-bulling campaign by have crocheters and knitters make blue hats that is distributed to schools across the in October, which is National Bullying Awareness Month. Since I was bullied as a kid, I feel that is a worthy charity to get involved in. I also still get to crochet and knit, a win-win. I already have two hat made that I did shortly after I sent off the hats for last year. However, the first hat I made this year is a crochet hat. The weird thing is that I was not ready to start a hat. My husband was cleaning up his desk area and he found my crochet hook that I specifically use to crochet hats. I took this hook and commenced to make the you see pictured. As mentioned it is crocheted hat. It is a ribbed hat using front post and back post crochet. I plan on writing a pattern for this hat, right now it is busy at work and it is going to be hard to find time to write out the pattern. What is likely going to happen is that I will make this hat and I will write out the pattern as I go along. This hat will likely be a third hat.
I am working on a second hat right now. It is a crochet waffle stitch. I am following a You Tube video for this hat. I don't know how many hats I will make when it is all said and done. I have to get my hats mailed by August 1, 2021. I had bought blue yarn at Wal-Mart just for this program and I guess I will send off what I get done when I run out of blue yarn or run out of time.
Inspire Me Monday
Handmade Monday