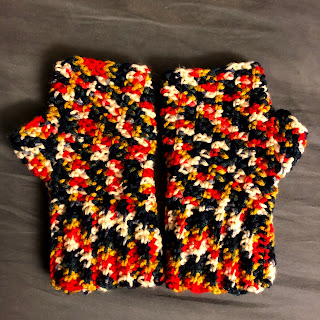 So the pattern for these gloves is a pattern I wrote 9 years ago.  I had forgot I had written a pattern. I found the original glove and realized that it is the small shell pattern I used in my sock pattern. 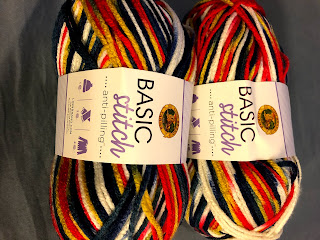 One skein of the basic stitch made up these gloves. I had used a size G hook, even though the pattern says to use an F hook. I should of stayed with the F hook. The G hook did work, but I felt it was slightly big.  I had left off the decorative rounds on the top of the glove and the thumb. I also did a final round at the top of the glove of 2 sc shell instead of three sc shell. I though that I needed to make the top a little smaller.

I will likely keep wearing these glove to the hockey games, even though my fingers will still be cold.

So the pattern I wrote up for these gloves can be found here.